Information contained in this news release is current as of the date of the press announcement, but may be subject to change without prior notice.

Newgarden is a two-time INDYCAR Series champion and is looking for his third series title and first Indianapolis 500 win in 2022. He took over the series points lead with his 22nd-career INDYCAR victory and his first at Long Beach.

“This win is definitely up there on the my list,” Newgarden said after the race. “This was a fight. This was not an easy race to win. The Hitachi car was on it. I knew coming in to the race we had a great strategy and with Team Chevy we were going to be alright.”

Newgarden is now one step away from winning the PeopleReady “Force for Good” Challenge, that will go to the first driver to take the checkered flag on each of INDYCAR’s three different style tracks – street circuits, road courses and ovals. The million-dollar prize will be split between the driver, his team and a charity of their choice.

“Congratulations to Josef Newgarden and Team Penske for another outstanding INDYCAR performance,” said Rob Sharpe, senior vice president, sales & marketing, Hitachi Astemo Americas. “Their teammates at Hitachi and Hitachi Astemo are among their biggest fans. We will be cheering them on throughout the coming race season.”

Sharpe noted that Hitachi Astemo is a technology partner with Chevrolet in the development of its highly successful INDYCAR engine program. The Hitachi name appears on the sides and rear wing of Team Penske’s No. 2 car and Astemo appears on both front wings.

Hitachi Astemo provides fuel-system components for all of the 2.2-liter, twin-turbocharged Chevrolet racing engines in the INDYCAR Series. 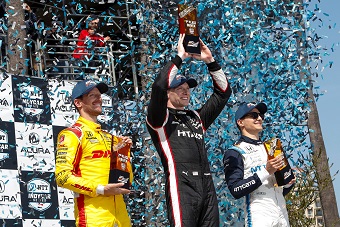 *Races where Hitachi logos will be prominently displayed on the car of Josef Newgarden, Hitachi’s contract driver.

Hitachi Astemo is a global automotive technology company formed by the recent merger of Hitachi Automotive Systems with Honda’s Keihin, Showa and Nissin Kogyo groups. Headquartered in Tokyo, the company has approximately 90,000 employees and leadership positions in a wide range of product areas including AD/ADAS, software and powertrain, as well as chassis and motorcycle systems. Its headquarters for the Americas is in Farmington Hills, Michigan.

Team Penske is one of the most successful teams in motorsports history with 18 Indianapolis 500 victories, two Daytona 500 Championships, a Formula 1 win and victories in the 24 Hours of Daytona and the 12 Hours of Sebring. Newgarden entered the 2022 INDYCAR season with 15 pole positions and 20 wins. Born in Hendersonville, Tennessee, he lives in Nashville. More information is available at www.teampenske.com..

In order to read a PDF file, you need to have Adobe® Reader® installed in your computer.